I’m a half-way decent cook but a bad grocery shopper.  I also start thinking about dinner 10 minutes after my body has activated the low fuel alert so last minute grocery runs are almost always a non-starter.

As a result, I spend a lot of my kitchen time trying to make something fast out of ingredients that were purchased with no master plan.  I call it Chopped: The Home Game.

I have not been good up to this point of writing any of these creations down which means I have to reinvent them every time.  This series is an attempt to remedy that.

My photos will not be anywhere close to this fancy

Sometimes I start from scratch, but more often I have a recipe from the internet that serves as starting point.  This evenings starting place was Barley Burger Stew.

There is no way I’m going to retype the recipe for you.  I did google it though.

This is one of the rare times I actually made note of the changes I made to the recipe on the actual recipe so I’ve replicated the results on more than one occasion.

Can I make this without going to the store Substitutions

These are the extra substitutions I made tonight based on what I had on hand.

I followed the basic cooking instructions except it only needed to cook for 15-20 min thanks to the quick cook barley. 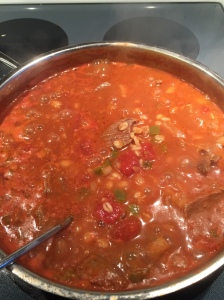 It turned out pretty tasty.  I liked the extra tomatoes and sirloin instead of ground beef a lot. The green peppers also worked better than the carrots.

I guessed wrong on the water so it was more of a soup than stew.  Next time I’d cut the water by a cup or so.

Smart. Kind. Funny. At least that's the goal. I care about encouraging girls to consider STEM careers, helping nonprofits be the best they can be, cats, and German-style boardgames.

created with Kate Wilson on Lake